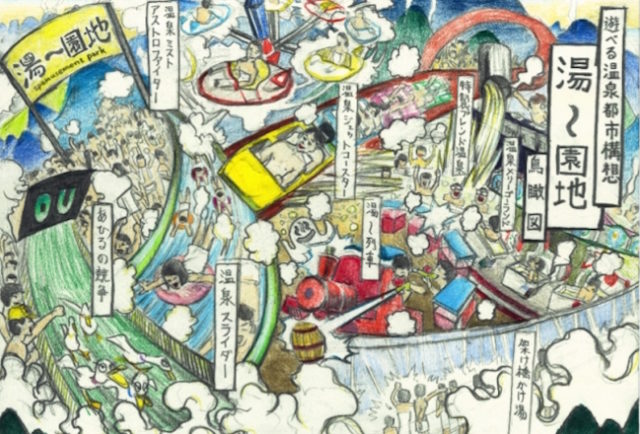 Beppu City in Oita Prefecture is out to be the first city with a hot-springs-related amusement park, called a yuuenchi (a play on the words for amusement park, yuenchi, and hot water, yuu). It’s first step was to release a video: https://youtu. be/UbMmhQYoAsM. The next step was to release an implementation outline and conceptual drawings for the park. The YouTube video was released last November to launch the spa-amusement park initiative. If the YouTube video got 1 million views, the city promised, it would launch the initiative. It was the first video to make such a promise based on how many views it got, and in four days, it had been viewed more than 1 million times. As of this writing, the video had been viewed more than 3 million times.

Once the 1 million view trigger point was met, Beppu put together a team to draw up plans, started crowdfunding and other fundraising and support activities, and began settling on the attractions the park would have. The campaign has raised more than 30 million yen, which is enough to formalize implementation. Details about the eight planned attractions have been released. The park is set to open in July. On April 12, it opened a spa-musement website to feature plans and details about the attractions. Ticket sales have also begun. (Information provided by Beppu City, Oita Prefecture)